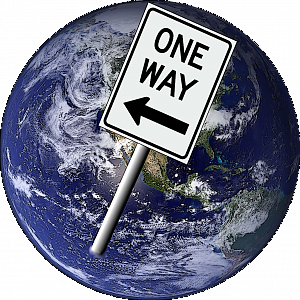 You sure did hear about globalization, it's affecting all of us whether you live in Europe, the U.S. or any other place of the world. Thousands of jobs were downsized in one part of the world to be replaced by cheaper workers in another country. Resources are transported and distributed in all parts of the world to create and produce a product in the most cost effective way. Lower the cost and raise the profit. Probably the device you are reading this on was not produced, not even assembled the country you live in. This works quite well as long you don't try to globalize for yourself.

It started some years ago with regional lockout. This way the provider of digital content are in control where you can consume and what price you got to pay (different markets offer different prices).

Reducing the costs is just fine as a producer but is a major no-no for you as a customer.

Don't get me wrong - the creators of content must be paid. No doubt about that. And there are many people in this world who are willing to pay. Hello? There are people who want to spend their money. But they can't!

If you live in the wrong place of this world you got no chance to get that digital content. Here in Germany all TV shows are synchronized so they will be aired much later than in the U.S. (most TV shows are still produced there). But I want to see the original version with native speakers. I don't need the synchronized version and guess what: I do not even watch it! Yes, there are some (not so legal) ways to stream right from the US (be it iTunes, Netflix, Hulu or Amazon). Dear content providers: don't blame piracy if you reject peoples money. You could learn from them. Why should I go through all that hassle when torrent is so much easier? Shouldn't the legal way be the easy one?