Pump up the message - blocked from the promised future

Every window system I know of, uses an implementation of an event loop to process things like mouse button clicks and alike. Maybe in your window system it's not called event loop, maybe the term message dispatcher, message loop or message pump is used. The basic idea behind this should be the same: the operating system handles things like mouse movements, interrupts and puts them into a central queue. 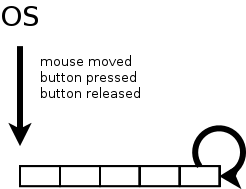 A dispatcher pulls event after event from this queue and decides which process should handle it. In case of interrupts you may have registered to be informed when it happens. When the user presses the mouse button, the dispatcher can calculate which window is affected and hand control over to the corresponding process.

As long as the process handles this event, no GUI drawing happens, no further events are taken from the queue by the dispatcher or if dispatched are queued on process level, they are not further processed there. 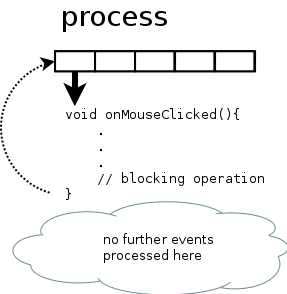 On one hand that means that you as a coder have to return control to the dispatcher as fast as possible and on the other hand every kind of long processing has to be handled concurrently, e.g. in another thread. This peculiarity is shared by many operating systems and programming languages. It does not matter if it's Linux, OSX or Windows (or something else) and it happens regardless of the language used. Be it C, C++, C#, Java and whatnot. This blog entry is about what that means for C++ programs compared to the solutions in other paradigms.

Instead of putting the blocking operations into the event handler, shovel it into a separate function and call it in another thread. Your event handler can return immediately, events will still be processed and the GUI can be drawn. And they live happily ever after, don't they?

Depending on programming language and operating system, creating a new thread can be just a few lines of code or royal PITA (I am looking at you, Qt framework), consisting of tons of boiler plate code. When the thread is finished, it must somehow inform your main program about it. If the user pressed a button and started whatever action, he should be notified that something has happened. Some thread implementations are not designed to do that, they are more like hit and run. Not so useful in UI programming.

Let's assume starting a new thread is as easy as pie and your are informed that the thread has ended, the handling usually happens in some sort of callback function (or slot or delegate or…), or in other words: it happens somewhere else. Maybe you are even still in the context of the separate thread and can not draw to the GUI.

If you are using C#/.NET, you get help from the BackGroundWorker class that abstracts the thread handling, there are also some lines of code to write but they are handled by the IDE mostly. You as the coder can focus on the task itself.

If you want something like that in C++, you must write it on your own. Even in GUI frameworks like Qt, which set out to ease the pain of writing UIs in C++, there is nothing comparable. Yes, it's doable, but stupid boiler plate repetitive work. For the ones that didn't get it so far: I'm in a love/hate relationship with the Qt framework. I don't even want to talk about writing native (cough, MFC, cough) code for Windows. That's just ridiculous and clearly not the foundation for the success of that platform.

On top of that most UIs don't just have only one button, your code base grows, the code flow is interrupted and bit by bit it transforms to spaghetti code. 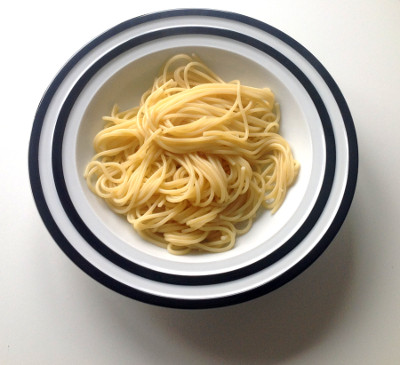 Cut down to the chase

Let's have a closer look how it's done in C# nowadays:

Isn't that cool? Spin off concurrent execution simply by calling an async function and then continue on the task object when it's ready! The given example was not GUI based but that's exactly the kind of pattern we need.

Before we dive into this example, just a few words to those not familiar with Objective-C: code starting with a caret sign ( as in ^{ //some code here }) is called a Block. This is simply a Lambda function. The dispatch_… code parts call a C API from a library named Grand Central Dispatch. It is used to put Blocks of code in queues that are executed in separate threads. Very similar to the event queueing of the operating system, instead of events some pieces of code are queued. Remember the GCD name, we will come back to that later on.

The above mentioned example downloads an image from a network URL in a separate thread and when that is done, it puts the image somewhere in the UI. The UI can only be manipulated from the main thread, so this Block of code is queued on the main thread.

By far not as elegant as the C# solution but still a pretty lean way to keep the corresponding pieces of code together. Everything is written in the same function but executed at different times in another context. The burden of multithreading is lifted and abstracted away.

C++, a better solution lies in the future

The caveat here is that calling get() on the future blocks. While there are scenarios where this kind of behavior s useful, for firing up your UI it is not. IMHO that is humiliating in the year 2014, but who am I to criticize the C++ language?

Microsoft has created the PPL, a library that can amongst other tasks be used to execute work items in parallel. If you are in WinRT programming, you will certainly stumble upon this because there you will use the concept of continuations for executing stuff async and keeping the UI fluent.

On Code Project is a nice article about using the open source versions of this library. I have not tried that personally (yet) but maybe this is a nice way of using this with another OS.

At the QtDevDays2013 Ivan Čukić held a nice talk about "Natural task scheduling using futures and continuations". Using QFutures and some clever template meta programming he introduced an example of writing readable code. If you use the Qt framework, you should give it a try!

Make sure that you watch Sean Parent's talk from GoingNative2013. Among a lot of useful insight in coding he mentions libdispatch, published from Apple open source. Out of fairness - and before I begin to write what fascinated me - I must mention that I first was linked to the talk in this tweet from Meeting C++. The part I am referring to would also match here. Remember the Grand Central Dispatch library in the Objective-C example? The library is open source, too! And Sean parent uses that one to create an even more convenient way to use the power of the library, since he posted the slides in public, I think it's OK to quote his example code here:

Seems worth looking at, doesn't it? So there are some alternatives to circumvent the blocking future.get() but as nice as they are - they are not standardized. And being in the standard is IMHO needed to get programmers to use such features in their code.

Hopefully the Parallelism and / or Concurrency TS get us going this year.