A few days ago I've bought an IP camera from Foscam. 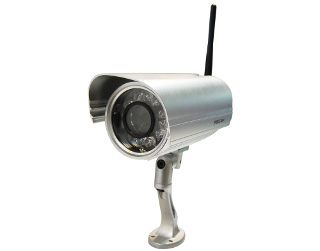 The result was very disappointing. Besides the fact that this thing was D.O.A. (it lost its network connection every 10-15 seconds and never transferred one single image), the web interface was for lack of a better word: bullshit. That thing went straight back and they didn't convince me to order another one. Even the max. resolution of the camera was not as advertised.

So I wanted an IP camera, a Raspberry PI was already at home. It could simply be extended to use wireless LAN and there is a camera module available. ding ding ding It's project time :-)

Instead of a infrared motion sensor or even a fancy is there a movement in the picture algorithm I decided to go vintage. Using a reed switch it is quite easy to check if a door or window has been opened. The Raspberry Pi has a GPIO interface, connecting an external switch to the little computer is almost foolproof. You just need a pull-up resistor and you are ready to go. 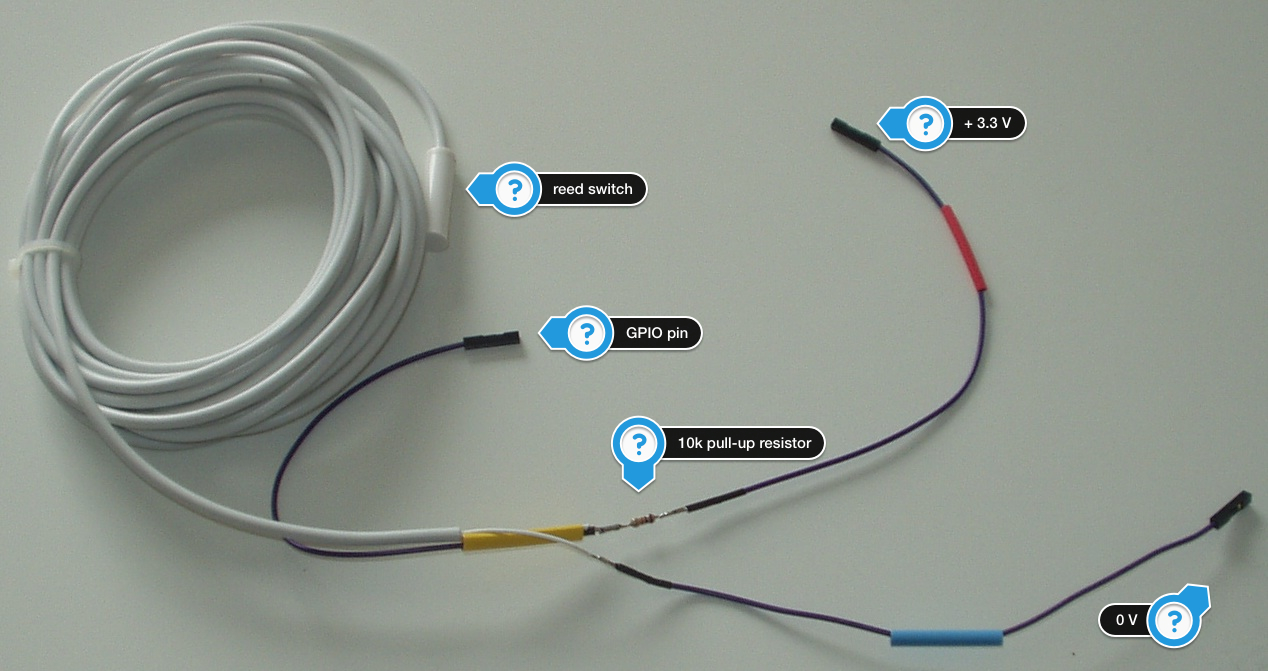 That's for the switch part.

For wireless connection I've attached a Logilink WL0145 (sorry, it's in German). Worked like a charm at first sight but the adapter lost connection after one day. There seems to be a problem with the power management, so it's simply siwtched off (runf iwconfig to see if it's on), edit /etc/network/interfaces and put a line with wireless-power off in there.

Maybe that's not enough, future will tell. But there is help out there.

Almost a year ago I started learning C++, so it became clear that a tiny bit of the software side would be coded in C++. The first examples I found showed some kind of bash command that read in the status of a GPIO pin and then slept for some time and that in an endless loop. This would be the first time that I would write code in C++ for Linux, so the Qt framework comes into mind to even out the platform specific details. Not knowing the exact implementation details of a QTimer, I sensed that it would be a tiny bit more elegant to use a timer that calls a function, which pulls the status of the GPIO pin. There is even a Debian Wheezy based kernel out there that would enable the use of interrupts but I couldn't find any examples, details, whatsoever.

The first kind of library to access those pins from C++ that I found was http://hertaville.com/2012/11/18/introduction-to-accessing-the-raspberry-pis-gpio-in-c/. So I used it.

When started on the command line it waits for a given GPIO pin to change its status to the desired one and then call an external program, e.g. raspivid.

For reading the status of a GPIO pin you must be root, sudo as user pi or edit /etc/sudoers with visudo in such a way that you can sudo gpioOberserver from a regular Linux user.

To get started, install the Qt environment on your Debian Wheezy Image, download the code from Github and compile.

The executable will be installed as /user/local/bin/gpioObserver. You can sudo it as user pi or add a new user and work on /etc/sudoers if you want that task separated.

gpioObserver waits for a signal change from 0 to 1 and then starts the batch script doorAction.sh that mounts a drive on a NAS system, records a videofile with raspivid and unmounts the drive again. Start gpioObserver from crontab, e.g. like 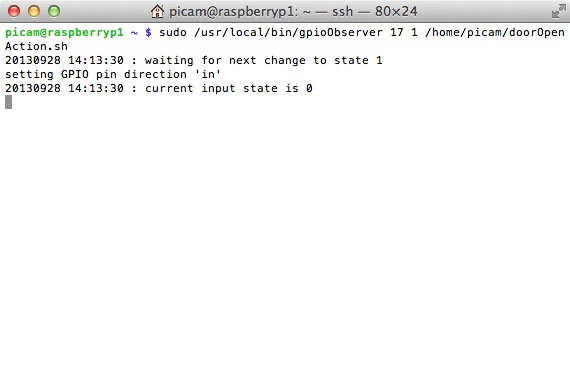 Today I would use Rust to write this little program.