Failing to switch the christmas lights

No so recently - more like 2020 - I've bought a set of power sockets at a German Lidl branch named SilverCrest Funksteckdosen-Set (IAN 32813_2001, produced by ROWI Germany GmbH) that can be controlled via a 433 MHz remote. 433 MHz is part of the ISM band which is reserved internationally for industrial, scientific and medical purposes.

The set consists of 4 power sockets that go into learning mode the first 30 seconds after being plugged in. By pressing the on button of channel A, B, C or D on the remote control the socket is assigned to the respective channel. In that way it differs from the models that are described in some of the German blog posts, e.g. Hacking Intertec Funksteckdosen or 3 Wege zum Funksteckdosen hacken. Those sockets and remotes used DIP switches to encode/decode the individual channel and therefore a relation between the binary value of the DIP switches and the transmitted signal could be etsablished.

NOTE: There is no communication outgoing from the socket itself.

For decoding and later on sending of the bitstream I've ordered a cheap 433 MHz wireless transmitter and receiver module set.

To decode the signal, I've connected an oscilloscope to the RX pin of the receiver. There is a lot of noise, when no button is pressed on the remote. 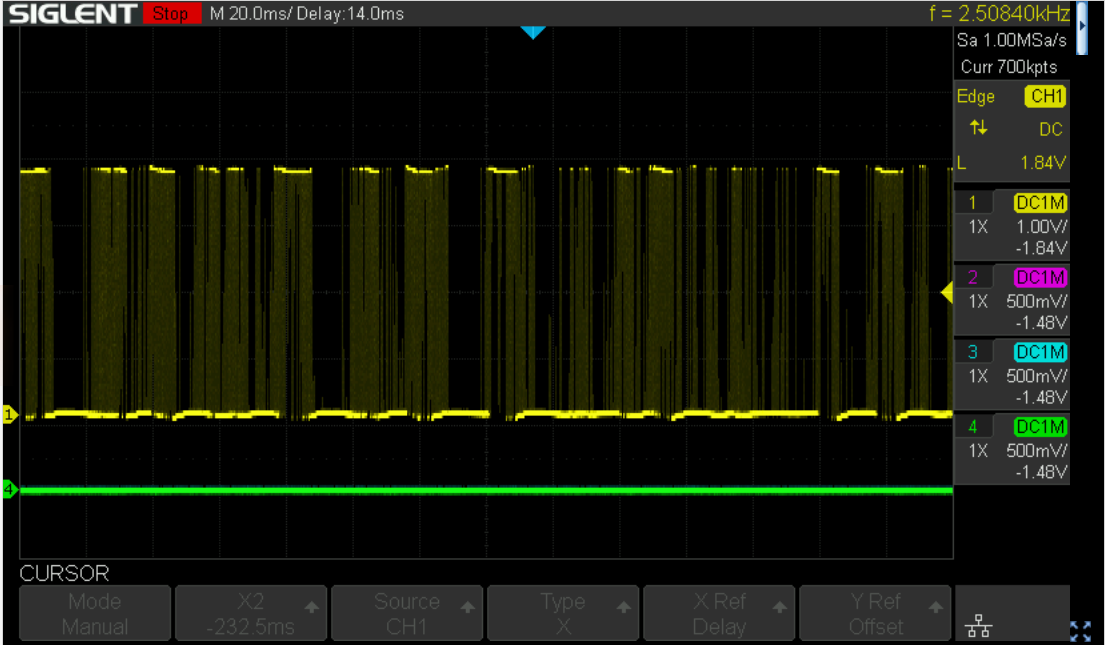 Probably the device uses some kind of automatic gain control and cranks up the input if there is no real input. Those cheap transmitter and receiver modules use a simple OOK (on off keying) mechanism to transfer the data with the radio wave. Communicating with 433MHz OOK/ASK wireless modules (#88) is a (Arduino based) video that explains in fairly good details what's going on.

Nevertheless the signal can be recorded, when a button on the remote was pressed. As an example, here is an image of pressing the on button for channel A: 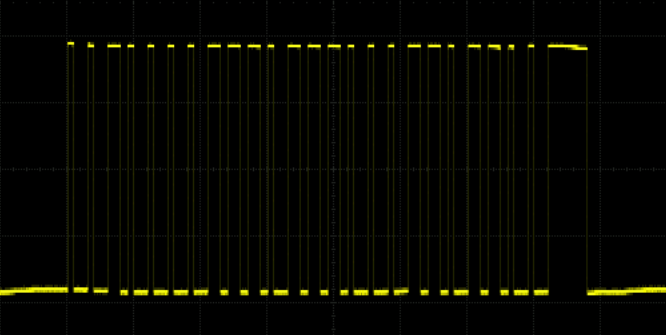 I am still wondering though why the long lasting sequences of low signals are not disturbed from noise if there is nothing beeing transmitted to signal a low value. Maybe it is not just OOK but also a combination with the simplest type of ASK (amplitude shift keying). While the Wikipedia article might be correct, the approach is too mathematical for my personal taste. Have a look at this image:

It is hosted on this German website explaining ASK. The right side shows a waveform used for a simple ASK implementation utilizing two different amplitudes to represent high and low values.

So much for the physical characteristics of the transmitted signal. On top of that there could be used a Manchester Encoding from the remote control which would give us the clock information. But there are quite long periods of low values in the signal, so that I don't think that this kind of encoding takes place. For a pure replay it doesn't matter anyway, since we must simply be able to create the same sequence of low and high values with a correct timing.

After taking a screenshot of every signal from each button, here is a table with the binary decoded signals.

Each bit lasts 0.5 ms, therefore 2000 bits are transferred per second:

NOTE: the bit sequences are repeated as long as the button is pressed on the remote control.

Since the power sockets must be teached in a 30 second time window, I assume that every remote control has its own specific code, so that customers don't interfere, should they buy the same system. Lacking another remote control, I can't validate that. But my guess is, that most of the bits encode the serial number of the remote control and only some of them the action (switch on or off) and maybe some the version or brand of the system.

The plan was to send the code through an USB ttl converter to the 433 Mhz tranceiver. Finally this should be done with a small Rust program.

Send the code, or how to fail

But first we need a proof of concept:

Send the code, take the blue pill and fail again

For the next try I used a blue pill board and wrote a simple program to send the desired bit pattern. To spice things up, I decided to write the code in Rust. To set up the environment I followed these instructions well knowing of the existence of the Rust embedded book.

After hooking up the oscilloscope to the receiver again, I learned that I just recorded and decoded a part of the signal. Here we go again...

Here is a full image of the turn channel A on sequence with the bytes marked in an alternating color:

Remarkable is the 4 time repetition of the part of the signal, I've already decoded during take 1. Since the complete sequence is repeated as long as the button is pressed on the remote, I mistook that part of the signal for the complete sequence. And it does not start on a byte boundary. I probably wouldn't have noticed the repeating pattern at all, if I did it right the first take. At least I saved some time decoding that part :-D

Just when I was on the verge of decoding the singals again, I stumbled upon the PulseView project. So I exported the data from my oscilloscope as binary wav formatted file and tried to import that into PulseView, which did not work at all. A small detour using Audacity made it possible nevertheless.

Anyway, back to doing it by hand.

Decoding, take 2, do it by hand

Here is the result for the binary decoded signal.

Of course having just the static code to switch on a socket on channel A does not get me anywhere. The final step is the code in this repostory. The blue pill awaits the bytes to be send from the USB serial interface and shifts the bit values to GPIO pin B15 to feed the transmitter.

Let there be light

Since this little project is not finished yet, I installed those four plugs and simply use the remote control.

If I press button A, plug A turns on (or off). If I press button B, plug 2 and plug 3 turn on (or off) and other weird combinations. Before starting this whole thing I should have tested all four plugs. The only thing that works like a charm is the master on/off switch. Maybe I come back later and finish this little project but as of now the remote works just fine ;-)